We can easily be maneuvered away from rational thought by a whole host of tricks, ranging from optical illusions to full fledged gaslighting, but by far the most insidious is the manipulation of political thought in order to sell the narrative of the oligarchy. This BBC series focuses more on the banal advertising side of it, but they do finally get around to the gritty bits in hour four if you want to skip ahead.

The linkage to technology with the term "hackable" is deliberate. Society has never had the ability to know you better than you know yourself until now. This exposure threatens our very ability to self-govern and the danger cannot be over stated. Fay Niker is correct to point out how this exposure is a failure of our political class to be even dimly aware of the problem. So, it falls on us as individuals to immunize ourselves.

Sagan introduced the idea of "baloney detection" in his book The Demon-Haunted World: Science as a Candle in the Dark as way to help people think about the scientific method and how to apply it to the information they encounter in daily life. The tools he sought to popularize were picked up by a skeptic named Michael Shermer who tried to market the idea using questions portrayed in this graphic, but complicating it unnecessarily in the process for some reason. 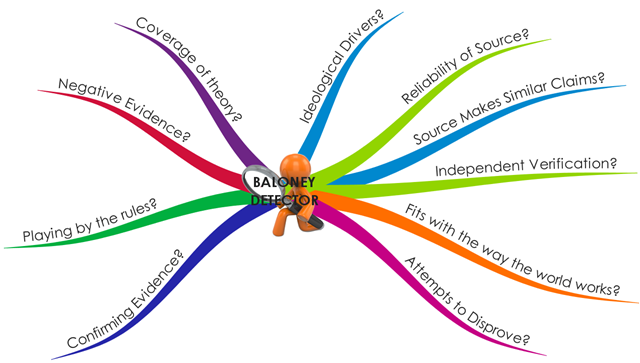 Facts are meaningless without context -- like a rowboat in the desert.

Science and journalism both seek to put facts in context so they become useful to others. We can each do our part as citizen consumers of facts by giving new information a bit of a scrub before we accept it into our world view, or pass it on to others.

To that end, presented here is a distillation of Sagan's ideas on the scientific method with Shermer's consideration of claimant credibility added in.

Row your own boat

Science dictates that when a claim is made it is subject it to critical review. What that boils down to on the individual consumer level is: We need to ask three questions 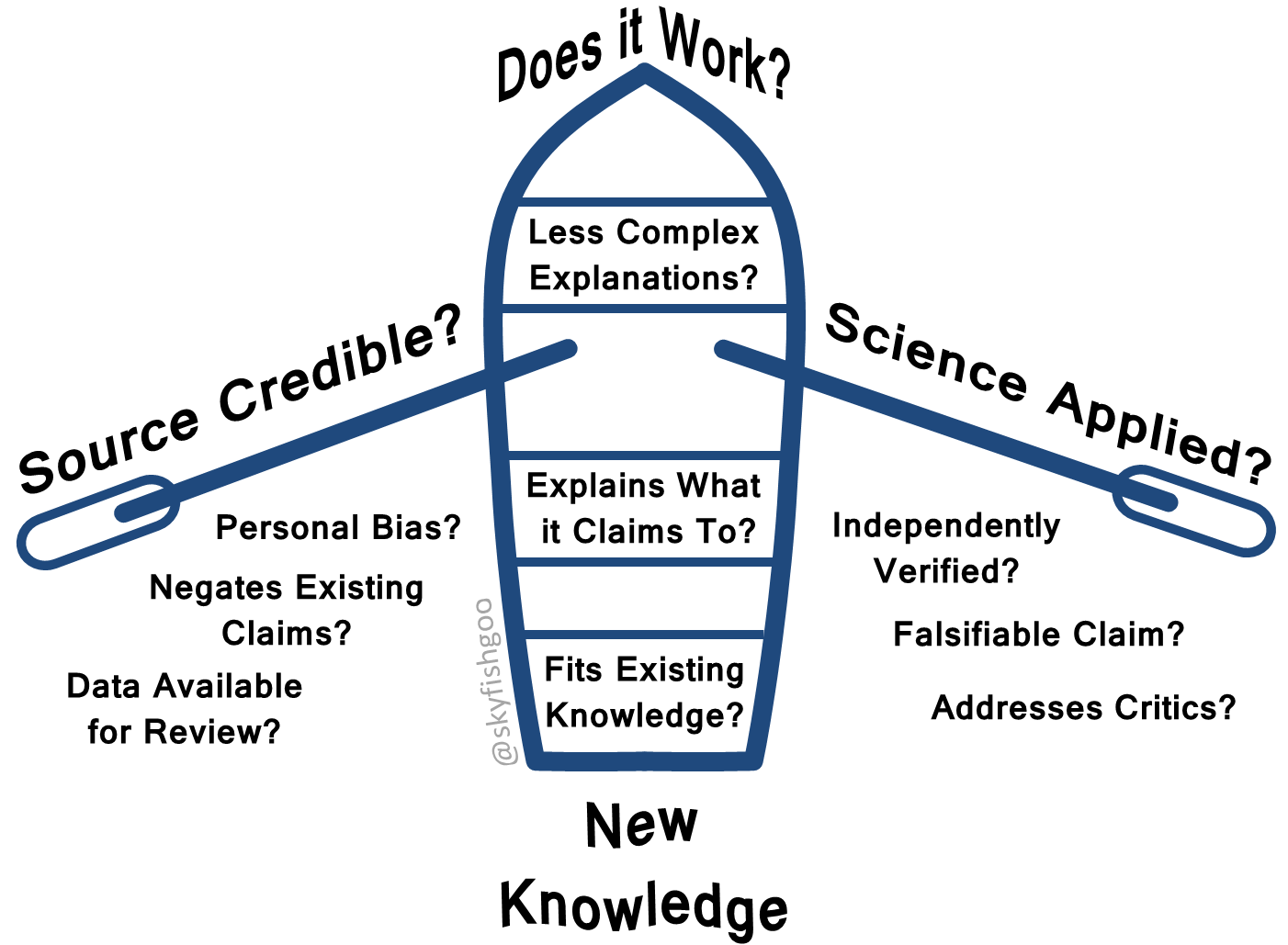 Failure to get an immediate yes answer to all three questions is grounds for discounting the claim. These grounds can only be addressed by working to answer the increasingly more demanding levels of inquiry under each question. Without those answers, the claim should be considered unresolved and no further action is required to accept it. The claim is rejected.

If this sounds judgmental, that's because it is. By design, it rightly puts the burden of proof upon the claimant. It is up to them to fill in all the blanks, and try to make their claim. This is the only path to gain new knowledge that does not leave us in a leaky boat, going in circles.

Claims about how the world works must be supported by logical arguments based on facts. Sometimes these arguments can go afoul as discussed below.

Another way to immunize ourselves is to be on lookout for flawed thinking. The logical fallacy comes in a variety of forms, but what they all have in common is they automatically void any argument that uses them. Much like an incomplete version of the rowboat above, this does not invalidate the claim itself. It simply means the claim remains unproven by that particular argument.

There are dozens of sites that will detail for you the full taxonomy of the logical fallacy kingdom. What this page will try to do is organize and consolidate them into four significant classes for better management.

These are the ones to know on sight because these can do the most harm and are regularly employed with deliberate and malevolent intent. They should be put down and put down with prejudice.

Appeal to consequences, or from adverse consequences. These tend to regularly scapegoat out-groups and are often designed to deflect attention away from activities of the in-group that is using it. This is the worst one because it works so well and can cause real pain for innocent lives.

The ad hominem, or Genetic Fallacy. Here the focus is shifted away from arguing the claim to attacking someone or some thing with often baseless accusations or slurs. Again this can be especially hurtful or dangerous for the targets.

This is a trap set by basing a question upon an unproven and often odious premise so that no answer can be provided without an admission of guilt. It is entirely intensional and if not caught by the target, it will be pounced upon by the poser at a time of their choosing.

Nirvana Fallacy, and Middle Ground Fallacy. Both seek to use extremes as a foil. The first seeks to discredit compromise by holding out for nirvana, thus ignoring the old adage "perfect is the enemy of good enough". The second uses a false extreme too justify shifting toward the "center". This could also be referred to as the 3rd-way fallacy.

No True Scotsman, or special pleading. This is often deployed when losing the argument, and attempts to redefine the parameters of the debate or change the subject and should be an automatic signal that the debate is over.

These fallacies are more common and familiar to most people already. But make no mistake these are a deliberate manipulation of the facts in order to avoid making the case on its merits. They would be funny, if they weren't so effective.

Everyone has heard this one before. "If you allow this thing A, then as sure as the sun will rise tomorrow we will all find ourselves dealing with Z in no time." Ignoring, of course all the many and varied choices that exist between those two points.

Another favorite. Here the aim is to paint such a cartoonish caricature of their opponents position that it becomes easy to knock down or dismiss. Often glossing over nuance or just exaggerating their opponents claims.

False Dichotomy, Excluded Middle, Black&White, Either/Or. All these forms of thinking attempt to cast the only options as A or Z by ignoring all the choices in between. It could be called the "i'm too stoopid to get this" argument. It is way over used and probably because too many people fall for it.

Observational selection, Half-Truth, Sharp Shooter, Spotlight, or confirmation bias. Whether deliberate or not, this is when selected data is omitted in order to bolster the argument. It can also be shifting where a search is conducted because the "light is better over here".

The tu quoque (you too!) fallacy. Tossing into the debate an unrelated argument in hopes of changing the subject, or simply turning back criticism with other unrelated criticism. Could also call this one the "white flag".

This group of fallacies are a clear signal that your opponent has given up trying to make their argument and have now just devolved into series of last ditch efforts to save face. The time has come to graciously accept their surrender.

Moral Equivalence, or Appeal to Nature. These have no basis in logic but rather seek to pull at heartstrings in order to win over their opponent. It's the debate equivalent of "puppy eyes".

Appeal to ignorance, Weasel Words, Ambiguity, Technicality. This set of arguments tries to use the lack of proof as proof itself in the most charitable interpretation, or deliberately sets out too use ambiguity to fluster their opponent. Often with lots of technical jargon or hair-splitting over definition of terms. It can be quite tedious.

Burden of Proof reversal. The party making the claim ALWAYS has the burden of proof. This attempts to flip that and get the critic to prove that aliens don't exist.

Appeal to celebrity. This hopes to win over critics on name recognition alone. This can apply even if the authority in question happens to be an actual expert on the specific claim. Authorities have been known to be wrong before.

Begging the Question. Attempts to prove a statement by assuming it's already a given. Sometimes this can be elaborately disguised, in which case extra points for effort, but still no win.

These fallacies are mostly benign and tend to be honest mistakes more often than not. After all, no one sets out to deliberately look foolish unless they are being paid to. Which is a consideration worth looking into, I suppose.

Appeal to Popularity, ad populum, common practice, tradition. These arguments are everywhere, especially in advertising but also in the corporate world to enforce conformity. It's peer pressure, plain and simple.

Anecdote, statistics of small number, composition, division, distribution. These fallacies try to draw a conclusion based on a too small sample that may or may not be representative of the whole. Sweeping generalizations fall into this category, using "all" or "every" when it is not proven.

Confusion of correlation and causation, post hoc, ergo propter hoc, False Cause. Assuming one thing causes another because of sequence or coincidence when there may be a third cause for both, or no connection at all.

It does not follow. This is just a catchall for weird random things people will throw up against the wall to see if it sticks. It can range from simple inconsistency to meaningless questions, or the idea that a claim is invalid because it makes fallacious argument. It only means that the claim is unproven by that argument. 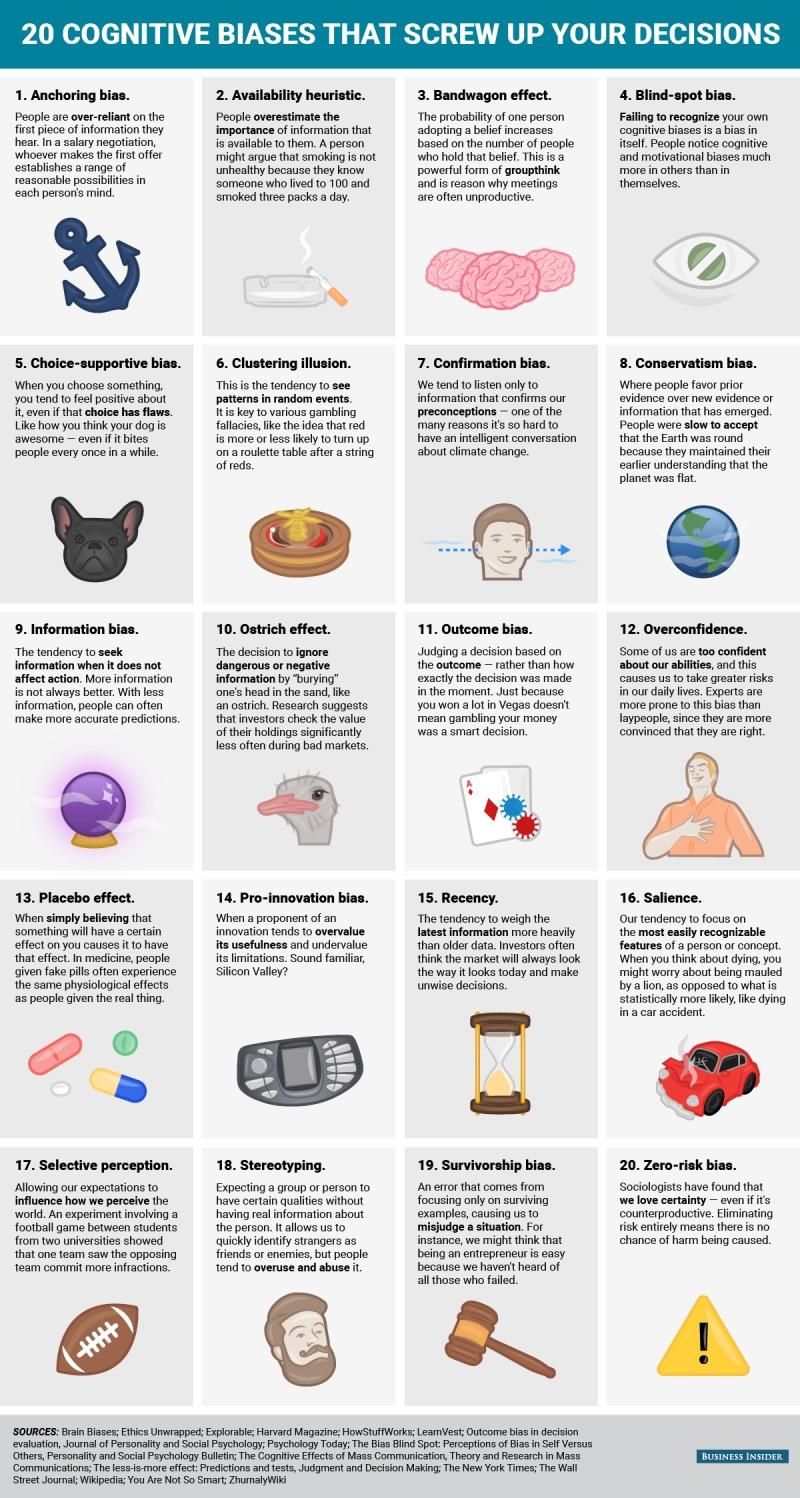 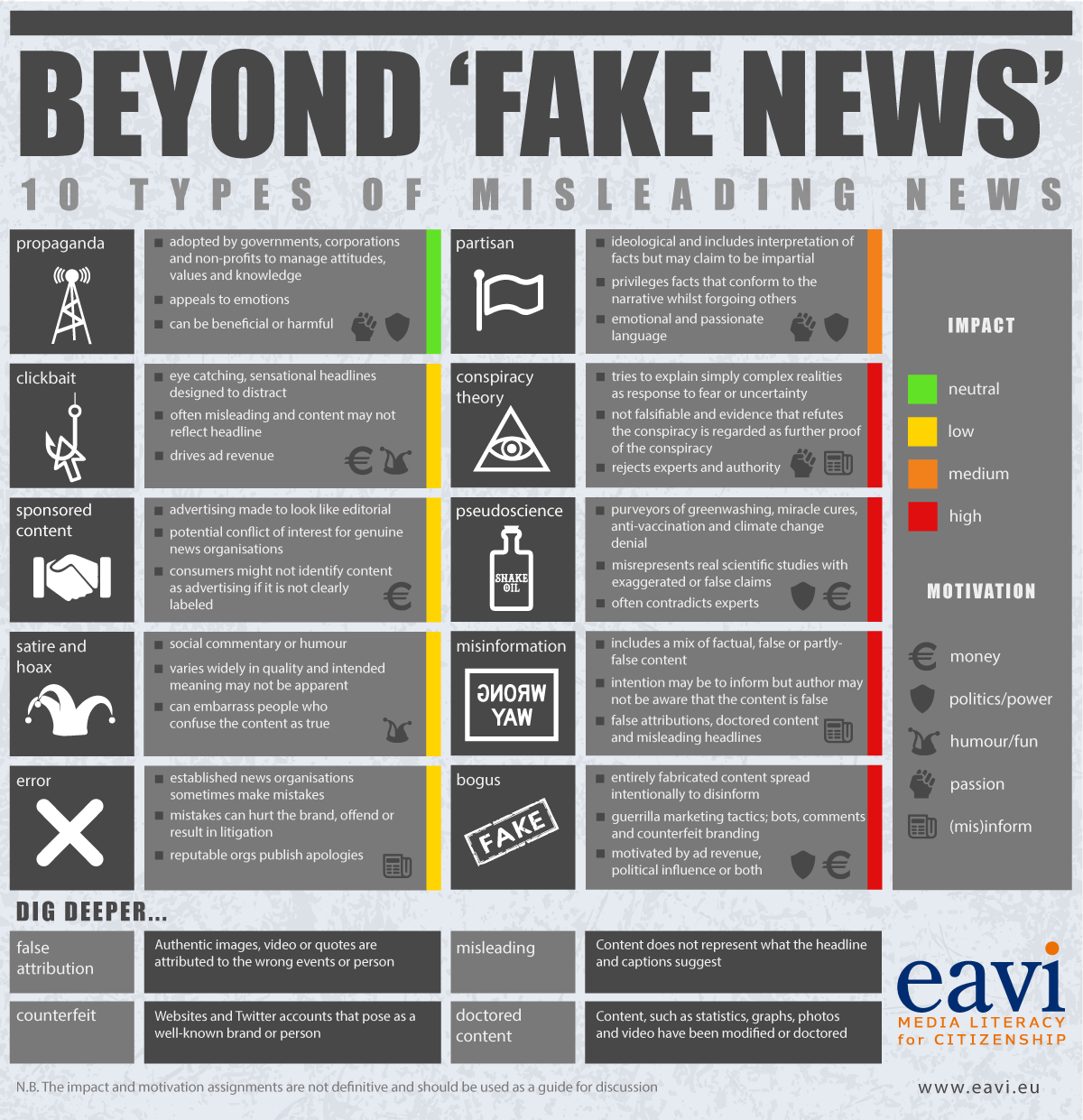 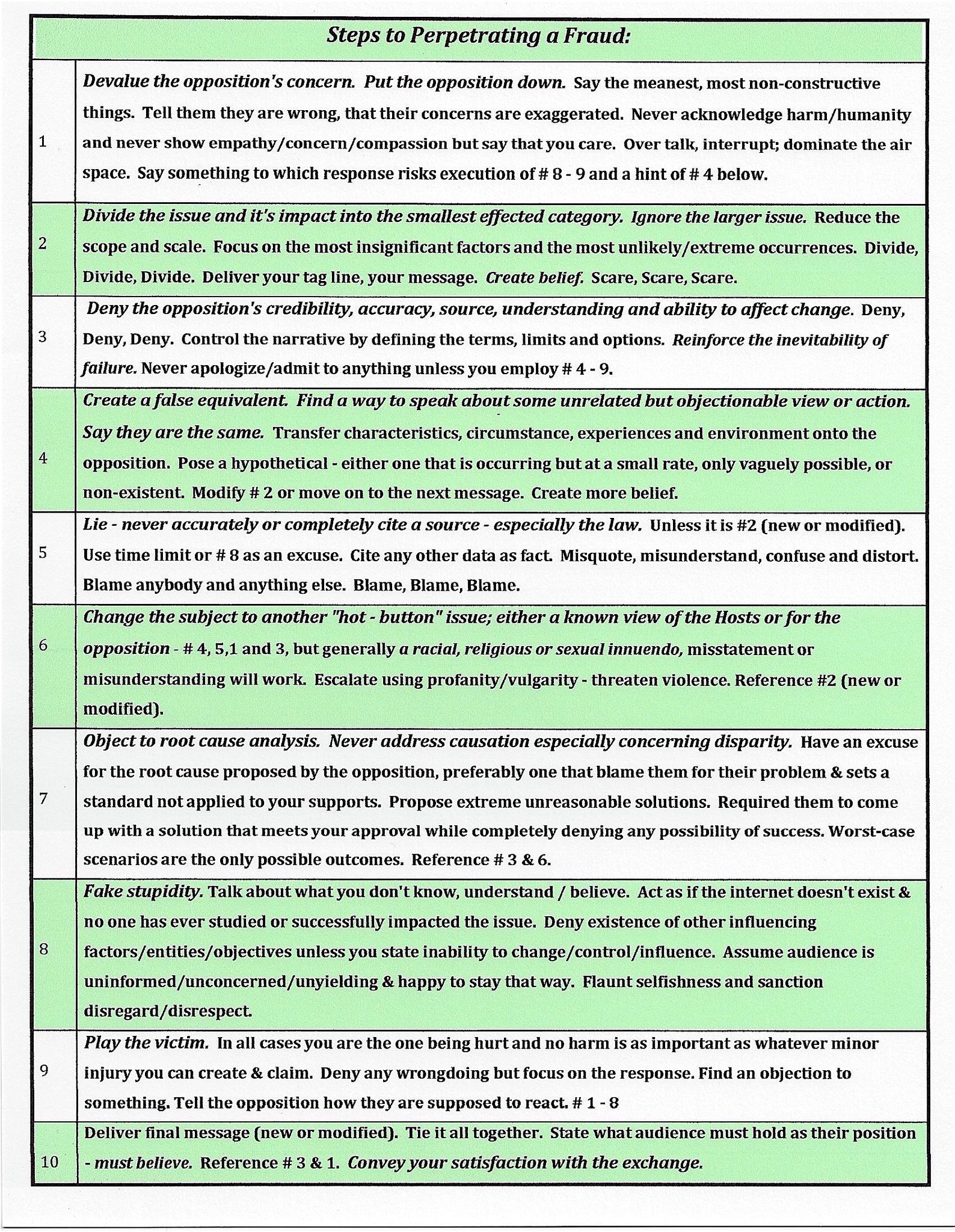 Thoughts on the role and nature of data

As long as we defend data integrity and apply scientific rigour and unbiased, fact-based, logical thinking in our analysis at all times our wisdom will grow. If we don’t, we’ll chase pink monsters. 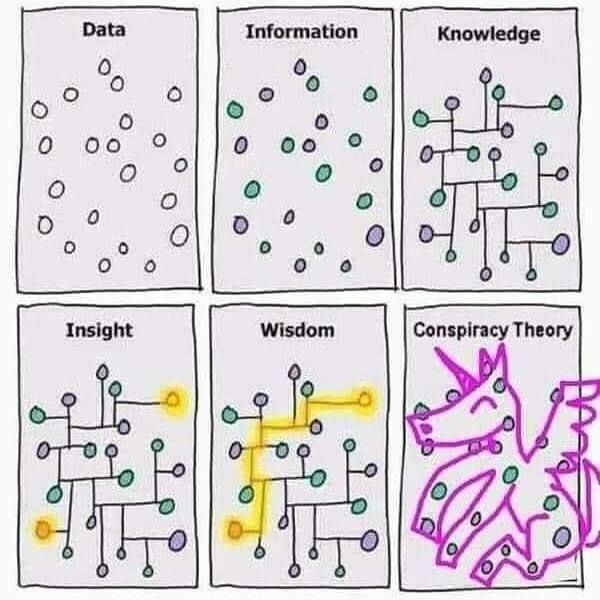 if the general public doesn’t understand science and technology, then who is making all of the decisions about science and technology that are going to determine what kind of future our children live in, some members of congress? There are only a handful who have any background in science at all, and some of them don’t even want to know about it.

If we’ve been bamboozled long enough, we tend to reject any evidence of the bamboozle. We’re no longer interested in finding out the truth. The bamboozle has captured us. It’s simply too painful to acknowledge, even to ourselves, that we’ve been taken. Once you give a charlatan power over you, you almost never get it back. 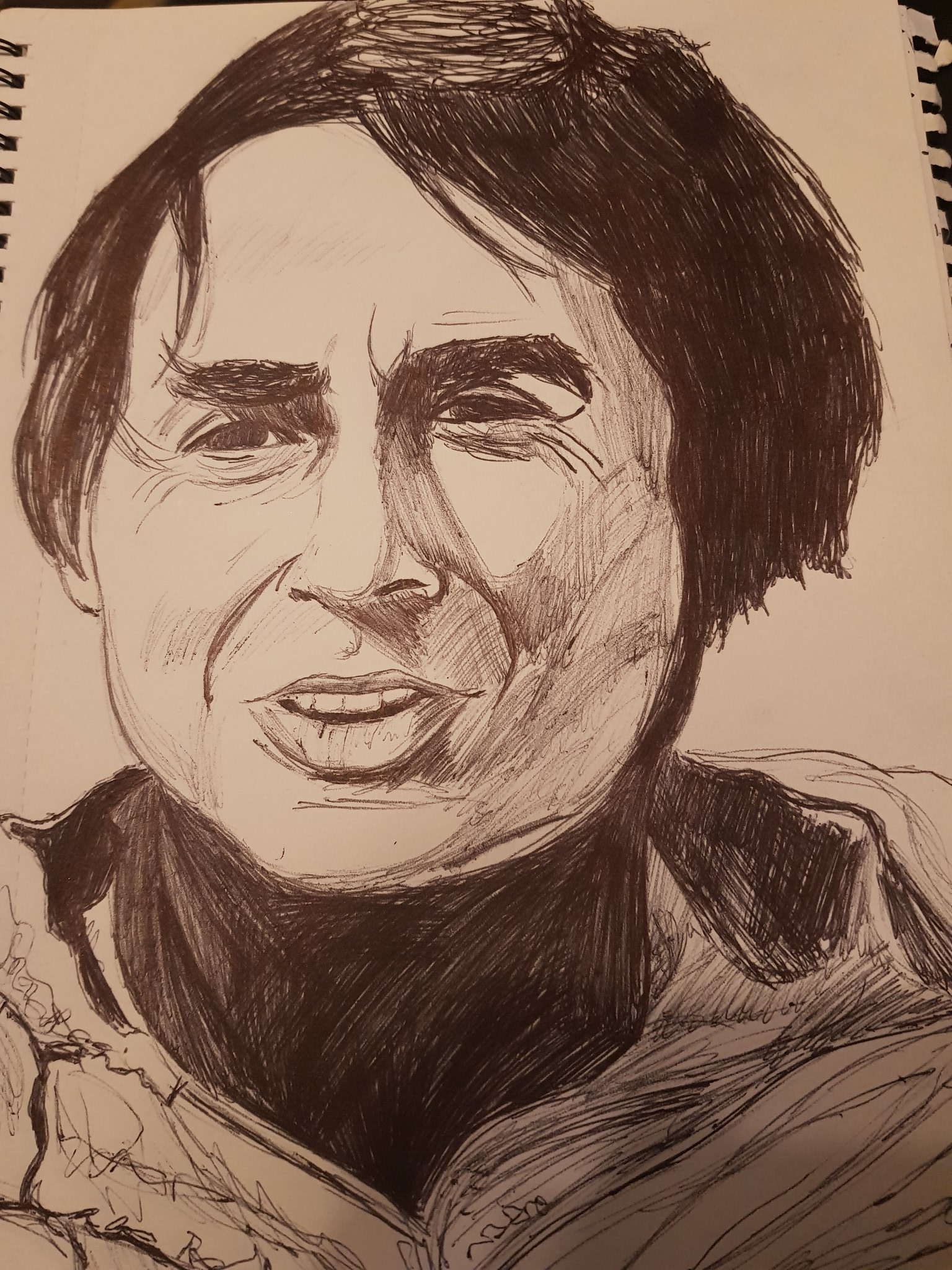